When social justice advocates argue that animal rights is not a social justice issue it makes me wonder, do they really believe this? Or have they just never honestly considered the moral value of other animals before. In the hope it is the latter, I put together an overview of some of the key arguments for viewing other animals as legitimate subjects of social justice. It’s the type of overview I wish I had come across before I went vegan. I like to think reading something like this might have made me reconsider (or rather honestly consider for the first time) my exploitation of other animals.

Part 1 looked at the ideology of speciesism, the moral value of other animals and the case for animal rights. Part 2 here explores Iris Young’s framework for social justice – the “five faces of oppression” (Young, 1990). This framework helps us understand the systemic nature of our oppression of other animals and why animal rights is most certainly a social justice issue.

Social justice and the “five faces of oppression”

If we agree with the arguments put forward in Part 1, that like us other animals have moral value, there is no reason why we should exclude them from the realm of social justice. However, the mainstream concept of social justice is not entirely straightforward.

To most of us justice means fairness. But most political philosophers interpret social justice as the fair distribution of (economic) resources in society (e.g. Rawls, 1971 and Miller, 1999). Other animals are left out of the discussion. They are viewed as part of the resources that require fair distribution to human members of society.

Unlike mainstream theories, Young (1990) proposes a social justice framework which includes, but is not limited to, distributive justice. While her framework was not developed to include other animals, it can be expanded to do so. Young argues for an “enabling conception” of social justice where justice refers “not only to distribution, but also to the institutional conditions necessary for the development and exercise of individual capacities and collective communication and cooperation”. She focuses on “the social structures and processes that produce distributions rather than on the distributions themselves”. She argues that “injustice refers primarily to two forms of disabling constraints: oppression and domination”.

According to Young, oppression is a structural concept. She notes that while the traditional meaning of oppression is the exercise of tyranny by a ruling group, the new social movements in the U.S. of the 1960s and ‘70s shifted and extended its meaning to refer to:

the disadvantage and injustice some people suffer…because of the everyday practices of a well-intentioned liberal society…..Oppression in this sense is structural, rather than the result of a few people’s choices or policies. Its causes are embedded in unquestioned norms, habits, and symbols, in the assumptions underlying institutional rules and the collective consequences of following those rules….In this extended structural sense oppression refers to the vast and deep injustices some groups suffer as a consequence of often unconscious assumptions and reactions of well-meaning people in ordinary interactions, media and cultural stereotypes, and structural features of bureaucratic hierarchies and market mechanisms – in short, the normal processes of everyday life. We cannot eliminate this structural oppression by getting rid of the rulers or making some new laws, because oppressions are systematically reproduced in major economic, political, and cultural institutions.

The systemic character implies than an oppressed group need not have a correlate oppressing group. While structural oppression involves relations among groups, these relations do not always fit the paradigm of conscious and intentional oppression of one group by another… The conscious actions of many individuals daily contribute to maintaining and reproducing oppression, but those people are usually simply doing their jobs or living their lives, and do not understand themselves as agents of oppression. (Young, 1990)

Young argues that while the structural and institutional factors that support oppressive systems may differ, all oppressed groups experience the “five faces of oppression”: exploitation, marginalisation, powerlessness, cultural imperialism, and violence, to varying degrees and in different combinations. Young suggests these “five faces” serve as criteria for determining whether individuals and groups are oppressed. 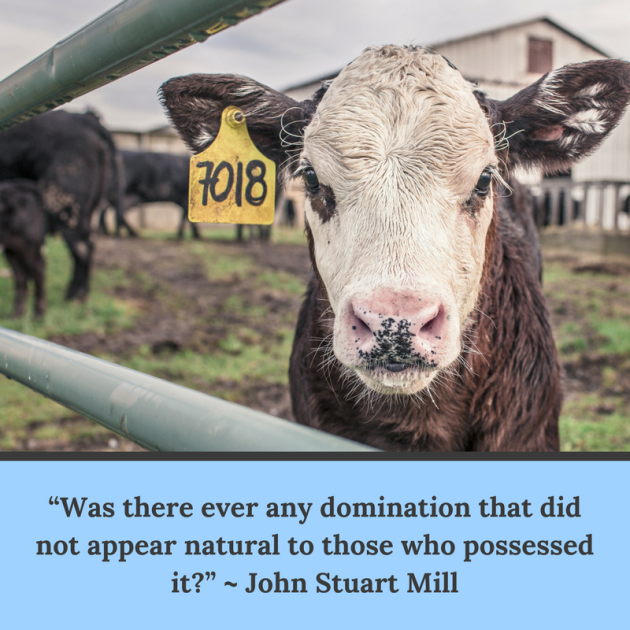 The faces of animal oppression

Gruen (2009) applies Young’s framework beyond its original application to human labourers to show that humans routinely and systematically dominate and oppress other animals in countless ways. The remainder of this section summarises Gruen’s analysis of animal oppression using Young’s framework.

Young’s first face of oppression, exploitation, refers to the systematic extraction of labour by one group to benefit themselves and not the labourers. This process of exploitation is essentially what happens to all farmed animals in the system of ‘animal agriculture’. Gruen highlights the exploitation of the lives and bodies of female animals in particular e.g. dairy cows, laying hens and sows. When the labour of farmed animals is completely extracted they are killed.

Young’s second face of oppression, marginalisation, involves the social exclusion of a group that is deemed of little value, whose labour is of no use, which then limits their capacity to fully participate in all aspects of community life. As Gruen notes, other animals are marginalised both symbolically (through the ideology of anthropocentrism and human supremacy) and materially. For example, when other animals used in entertainment become too big to handle they are often sent off to spend the remainder of their lives hidden away in substandard facilities. Young also argues that even if marginals had all their needs met, “injustices of marginality would remain in the form of uselessness [and] boredom . . .” (Young 1990). All we have to do is think of all those individuals imprisoned in zoos, living lives of uselessness, boredom and misery to know the truth of this.

Young’s third face of oppression, powerlessness, refers to those who are denied the opportunity and authority to make decisions about their own lives. Those who are prevented from developing their own capacities and treated without respect. All of the other animals used by humans – in zoos, factory farms, backyard farms, pet shops, laboratories etc. – lack almost any control over their lives. They are completely powerless. Furthermore, as Gruen notes, “Not only are actual nonhuman animals treated with disrespect in a myriad of ways, one of the most poignant ways of disrespecting humans is to compare them to a nonhuman animal. To be a nonhuman animal, in some way, is to be a thing unworthy of respect.”

Young’s fourth face of oppression, cultural imperialism, refers to the process whereby “the dominant meanings of society render the particular perspective of one’s own group invisible at the same time as they stereotype one’s group and mark it out as the Other”. The ideologies of speciesism and anthropocentrism and the illusory and contrived human-animal hierarchy (discussed in Part 1) are examples of cultural imperialism. In addition, as Gruen notes, many other animals are killed, at least ostensibly, in the name of culture. Gruen also points to the way cultural imperialism manifests in our personal lives with our relationship to “domestic pets” or “companion animals”. While we may not view our relationships with the other animals we care for as oppressive, they are still forced to live by our cultural standards and conform to our human rituals and practices.

Young’s final face of oppression, violence, refers not only to violent acts themselves, but to the social context surrounding them, which makes them possible and even acceptable.  Every aspect of ‘animal agriculture’ is violent, whether it is carried out in ‘backyard’ farms or in CAFOs (concentrated animal feeding operations). ‘Animal agriculture’ necessarily involves domestication, mutilation, forced insemination, separation of babies from their mothers, confinement, slaughter and so much in between. It is hell on earth for most farmed animals and no amount of ‘humane washing’ can change this reality. Every horrific aspect of the farming of other animals is accepted in our society. ‘Animal agriculture’ is a social practice that hides and legitimises violence against other animals.  It is the systemic nature of this violence and its existence as an accepted social practice which makes it a matter of social justice and not just an individual moral wrong.

It is clear to anyone who can honestly look at our unnecessary use of other animals for food, clothing, entertainment, experimentation etc., that they are the victims of systemic domination and oppression by humans. They experience all five of Young’s “faces” of oppression at an extreme level.

This two part essay was inspired by an exchange on Facebook where a non-vegan social justice advocate went to great lengths to argue that the suffering of humans was more important than that of other animals. The exchange prompted me to put together this overview of some of the key arguments for viewing other animals as being worthy of moral consideration and as legitimate subjects of social justice. I wanted to help those who haven’t yet made the connection between animal rights and social justice to make that connection.

I realise however that we have all been conditioned by the myth of human supremacy from a very early age. This myth justifies and legitimises our oppression of other animals and makes it seem normal and acceptable. So I understand that just laying out these arguments, however logical and well thought through they may be, might not be enough to help people make this connection. As someone who was not born vegan I know how uncomfortable it can be when our unconscious and unexamined beliefs are challenged. But I also know how important it is to challenge our beliefs if we want to live our lives with integrity and in alignment with the values we claim to hold.

So if you have read this far but are still not quite convinced, I invite you to examine some of your beliefs around other animals by asking yourself the following questions:

If you are anything like I was before I went vegan, I would guess that you haven’t thought to ask yourself these questions before. I would also guess that it’s not so much that you think other animals aren’t worthy of moral consideration, you are just not in the habit of considering them at all. You don’t consider their interests, their desires, their agency, their personhood, their right to live free from harm. Most importantly you don’t seriously consider the very real consequences of your everyday non-vegan choices on their lives.

Young, I., 1990. Justice and the Politics of Difference. Princeton University Press.

Exploring the connections between social justice issues. Finding ways to promote freedom, justice and non-violence in our everyday lives.

“If we do not change our daily lives, we cannot change the world.” ~ Thich Nhat Hanh

“Let him that would move the world first move himself.” ~ Socrates

“The human mind is remarkable for its ability to see the world in bits and pieces, each part disconnected from the rest, like an expansive vista viewed through the narrow slits of a picket fence.” ~  Professor Tom Regan