Like most vegans who spend time on social media, I have seen my fair share of ‘mmm bacon’ comments on vegan posts. In fact, this flippant response is the one I see most often (along with ‘lions tho’ and ‘plants tho’). I have also had the ‘mmm bacon’ type comment from those I have talked to about veganism in person. I have even heard it from health professionals who really should know better. Especially given the WHO has classified processed meat, including bacon, as carcinogenic to humans.

I have often wondered why so many different people have this same, seemingly automatic, response to discussions around veganism. How did bacon become “the one thing that people are unwilling to give up”?

I decided to look into the story of bacon. To find out the real reason bacon became so popular. What I found was a story of propaganda, manufactured demand and elite manipulation of our habits, beliefs and desires.

Edward Bernays, propaganda and the manufacturing of demand

My research led me to Edward Bernays, often referred to as ‘the father of public relations’. He was responsible for popularising bacon as part of the classic American breakfast of ‘bacon and eggs’ in the early 1920s.

Bernays (1891–1995) was the nephew of Sigmund Freud. He applied many of Freud’s theories about group psychology and psychoanalysis to develop new marketing and propaganda techniques (Taylor, 2015). These techniques appealed to the unconscious mind, deliberately sidestepping the conscious, rational mind.

If we understand the mechanism and motives of the group mind, it is now possible to control and regiment the masses according to our will without them knowing it (Bernays, 1928).

Bernays wrote about manufacturing demand for products using these techniques:

A single factory, potentially capable of supplying a whole continent with its particular product, cannot afford to wait until the public asks for its product; it must maintain constant touch, through advertising and propaganda, with the vast public in order to assure itself the continuous demand which alone will make its costly plant profitable (ibid.).

People must be trained to desire, to want new things, even before the old have been entirely consumed. We must shape a new mentality. Man’s desires must overshadow his needs (quoted in Häring and Douglas, 2012).

The engineering of consent

Bernays was an elitist. He believed the informed few must manipulate the habits and opinions of the masses to maintain order in a ‘democratic’ society. He referred to this manipulation as the ‘engineering of consent’ (Bernays and Cutler, 1955).

Bernays’ Orwellian views on democracy and the need for public mind control are shown in the following extract from ‘Propaganda’:

The conscious and intelligent manipulation of the organized habits and opinions of the masses is an important element in democratic society. Those who manipulate this unseen mechanism of society constitute an invisible government which is the true ruling power of our country….We are governed, our minds are molded, our tastes formed, our ideas suggested, largely by men we have never heard of.…In almost every act of our daily lives, whether in the sphere of politics or business, in our social conduct or our ethical thinking, we are dominated by the relatively small number of persons…who understand the mental processes and social patterns of the masses. It is they who pull the wires which control the public mind (Bernays, 1928).

Bernays’ clients included Procter and Gamble, General Motors, General Electric and many other Fortune 500 companies. He worked to improve the image of American presidents such as Calvin Coolidge and elitists such as John. D. Rockerfeller (Levine, 2011). Even Joseph Goebbels, Minister of Propaganda in Nazi Germany, was an admirer of Bernays. He used Bernays’ ideas to develop Nazi propaganda campaigns.

As noted above, Bernays popularised bacon as part of the classic American breakfast of ‘bacon and eggs’. At the beginning of the 20th century the typical American breakfast was light and quick. It consisted of some combination of fruit, a grain porridge, a roll, coffee and orange juice. In the 1920s, the Beech-Nut meat-packing company hired Bernays to boost demand for their bacon.

Bernays was Jewish and didn’t eat bacon himself. But this didn’t stop him developing a campaign to manufacture demand for bacon. The campaign centered on the power of ‘expert testimony’ to influence the masses. As Bernays wrote in ‘Propaganda’:

If you can influence the leaders, either with or without their conscious cooperation, you automatically influence the group which they sway (ibid.).

Bernays asked his agency’s internal physician whether a heavier breakfast might be healthier than a light breakfast. The physician said it would and, at Bernays’ request, wrote to 5,000 doctors asking them to confirm his opinion. The doctors agreed. The results of this ‘study’ were published in major newspapers and magazines. They also reported that many of these doctors advised that a heavy breakfast should include bacon and eggs. The campaign successfully associated bacon and eggs with a healthy and powerful start to the day in the public’s consciousness. Beech-Nut’s sales of bacon rose sharply as a result and bacon’s popularity has been rising ever since. You can see Bernays himself describing the Beech-Nut campaign here.

Today 70% of bacon consumed in the U.S. is eaten for breakfast. Over the past decade bacon has developed an almost ‘cult-like’ following, especially in the US. Bacon inspired products range from ‘Bakon Vodka’ to bacon cupcakes. Bacon sales in the U.S. were over $4 billion in 2015. A recent survey found that 65% of Americans would support the idea of making bacon their ‘national food’. 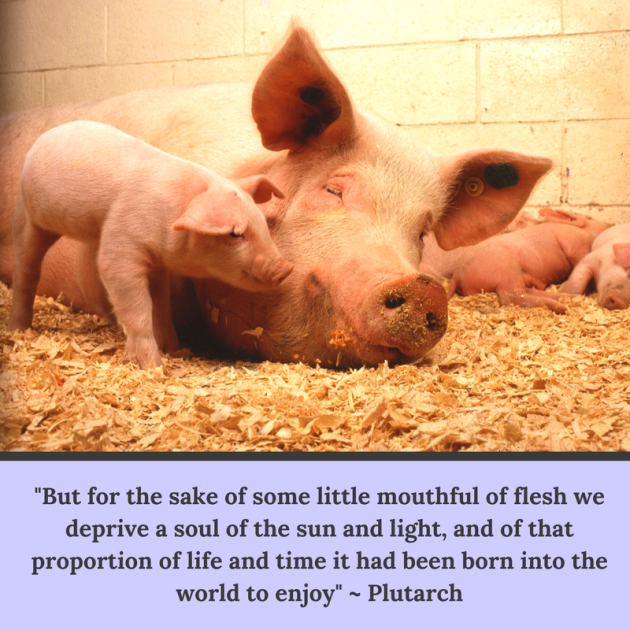 The manipulation of our beliefs and desires

There are many other examples of how Bernays’ propaganda campaigns successfully sold harmful products and narratives to an unsuspecting public. His campaigns helped: the U.S. government to create public support for American intervention in World War 1; the American Tobacco Company to increase cigarette sales to women; and Chiquita and the CIA to overthrow the democratically elected president of Guatemala and install a corporate friendly dictatorship (see the ‘additional information’ section below for more details).

It is sobering to think that our habits, beliefs and desires have been skilfully moulded by an ‘invisible government’. That our consent for the corporatocracy’s[1] pursuit of its own interests has been engineered using methods designed to bypass our conscious minds. Interests which invariably harm us, other animals and the planet.

The ubiquity of the reflexive ‘mmm bacon’ response to vegan arguments is just one of countless examples that reveal how conditioned we have become to think and act in habitual and automatic ways. The ‘cult-like’ popularity of bacon highlights the extent to which we have become uncritical consumers of narratives and products that harm, control and exploit ourselves and others.

Manipulation of the public mind is something elites have done throughout history to maintain power. But Bernays and his peers developed systematic and highly effective propaganda/advertising/’public relations’ methods still used today. Motivation research, popular in the 1950 and designed to uncover the subconscious reasons underlying everyday consumption behaviours, continues to have a major influence on advertising. It is estimated that over $1 trillion will be spent in 2017 on marketing worldwide.

Today, a new generation of mind controllers are using data mining and social media to exercise even more control over us. For example B.J. Fogg, referred to by some as a ‘modern-day Bernays’, has developed the field of ‘captology’, the study of ‘Computers As Persuasive Technology’. Captology aims to change people’s attitudes and behaviours.

Bernays’ methods laid the foundations for the development of our modern consumer culture. The use of propaganda, advertising and ‘public relations’ has enabled the planned shift from a ‘needs to a desires culture’. This consumer culture weakens and disconnect us. It alienates us from our true selves and encourages our self-absorption (Levine, 2011).

We need to take back our power from those who seek to mould ‘all aspects of our daily lives’ to suit their own agendas. We need to protect ourselves from the increasingly sophisticated methods being used to influence our attitudes and behaviours. We need to stop deferring to the values and opinions of ‘experts’ and society and start thinking critically for ourselves. We need to question everything we think we know.

The next time you find yourself automatically defending a belief or impulsively acting on a desire, ask yourself two questions. Did you consciously choose that belief or desire? Does it serve a hidden agenda over your own best interests? Chances are you didn’t and it does.

Bernays, E.L. and Cutler, H.W., 1955. The Engineering of Consent. University of Oklahoma Press.

Levine, B.E., 2011. Get up, stand up: Uniting populists, energizing the defeated, and battling the corporate elite. Chelsea Green Publishing.

[1] Corporatocracy is defined by Levine (2011) as government by big business for big business.

Bernays’ first great success was helping the Woodrow Wilson administration manufacture support for World War 1. He did this through the systematic use of propaganda techniques including the slogan ‘Bringing democracy to all of Europe’ (sound familiar?) (Taylor, 2015). This campaign launched Bernays’ career. Business people realised if these techniques could sell an unnecessary war, they could surely sell unnecessary products (ibid).

One of Bernays’ most famous campaigns was for the American Tobacco Company. Smoking in public was still a taboo for women in the 1920s. Bernays organised a group of female models to march in the 1929 New York City Easter Sunday parade. They told the press they were a women’s rights group who were lighting ‘Torches of Freedom’ (Levine, 2011). By exploiting women’s aspirations for freedom and equality and associating smoking with freedom-loving-women, this event significantly increased cigarette sales to women (ibid). Bernays himself was against smoking and tried many times to get his wife to stop.

In the 1950s the United Fruit Company (UFC), known today as Chiquita, hired Bernays. UFC wanted to overthrow the democratically elected president of Guatemala, General Árbenz. His land reforms threatened UFC’s interests. Bernays helped convince the American public and politicians that Árbenz was a dangerous communist. In 1954 the CIA overthrew Árbenz and installed a dictatorial oligarchy. This guaranteed that UFC’s fruit would continue to be picked by cheap local labour (ibid.). The American public was told that Guatemala was undergoing a ‘revolution’.

A short history of bacon

– Pigs evolved in Southeast Asia about 2 million years ago and humans started to domesticate them around 10,000 years ago.

– The Chinese first preserved pig flesh with salt around 1500 BC. Ancient Romans also had an early version of bacon, petaso, made from pork shoulder boiled with dried figs.

– In 1492 an explorer, believed to be Christopher Columbus, introduced domesticated pigs to the Americas and the English brought pigs to their American colonies in the 1600s.

– In the 1600s bacon became a staple for European peasants as a cheap source of ‘meat’.

– In the 1770s John Harris, opened his bacon company in Wiltshire, UK manufacturing bacon on an industrial scale.

– In 1924, the bacon we know now (pre-packaged and pre-sliced) was introduced to the U.S. by Oscar Mayer.

– Bacon didn’t always refer to preserved pork belly, as it does in the U.S. today. Until the 16th century bacon simply meant pork, and in pre-civil war America bacon meant any dry-cured meat.

One thought on “‘Mmm bacon’: The engineering of consent”

Exploring the connections between social justice issues. Finding ways to promote freedom, justice and non-violence in our everyday lives.

“If we do not change our daily lives, we cannot change the world.” ~ Thich Nhat Hanh

“Let him that would move the world first move himself.” ~ Socrates

“The human mind is remarkable for its ability to see the world in bits and pieces, each part disconnected from the rest, like an expansive vista viewed through the narrow slits of a picket fence.” ~  Professor Tom Regan